Sufferings of people in the Philippines due to Super Typhoon Goni are erased by APTERR’ 1,000-MT rice contributed by Korea.

Sufferings of people in the Philippines due to Super Typhoon Goni are erased by APTERR’ 1,000-MT rice contributed by Korea. 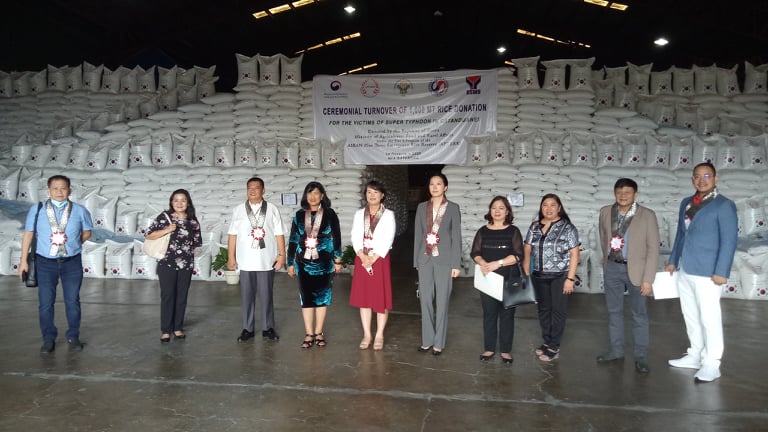 The ceremonial turnover of 1,000 MT rice contributed by the Republic of Korea (ROK) was held on 18 December 2020 marking a significant step in an effort to mitigate the impact on food security caused by the world’s most violent typhoon in 2020, Typhoon Goni. The rice will be distributed to affected families in the Island Province of Catanduanes, one of the most devastated provinces wrecked by the typhoon. The ceremony was hosted by the National Food Authority (NFA) under a supervision of Administrator Atty. Judy Carol L. Dansal at the NFA-Batangas in Batangas City, the Philippines.

The number of distinguished representatives from the relevant agencies including Mr.Arnel De Mesa, Assistant Secretary of the Department of Agriculture, Ms. Sang-Hui Lee, Counsellor, Head of the Economic Section of the Embassy of Korea in the Philippines as well as Mr. Emmanuel P. Privado, Director IV of NRLMB of the Department of Social Welfare and Development attended this significant event.  Meanwhile, due to the travel restriction imposed to contain the spread of COVID-19, Mr. Chanpithya Shimphalee, General Manager of the APTERR Secretariat, conveyed his condolences via a video message to those whose lives have been taken away or disrupted by the deadly typhoon. He also expressed his sincere gratitude towards all the involved governmental agencies of the Philippines for taking a quick and decisive action in tackling a looming food crisis in the said affected area.

The 1,000-MT rice was first given by the Republic of Korea under the APTERR Tier 3 programme to be used for rehabilitation scheme of people who encountered difficulties from the Taal Volcano eruption. However, since its initial purpose has already been fulfilled by the emergency assistance provided by the Philippine government together with APTERR’s 425-MT rice donated by Japan, the Korean rice thus was reallocated to a recently ravaged Island Province of Catanduanes where a huge demand of rice still exists.